To make the following description in a friendly frame we did it under an “interview” format done by a fellow audio blogger, James Grant, and Marc, Doge Marketing and product manager. 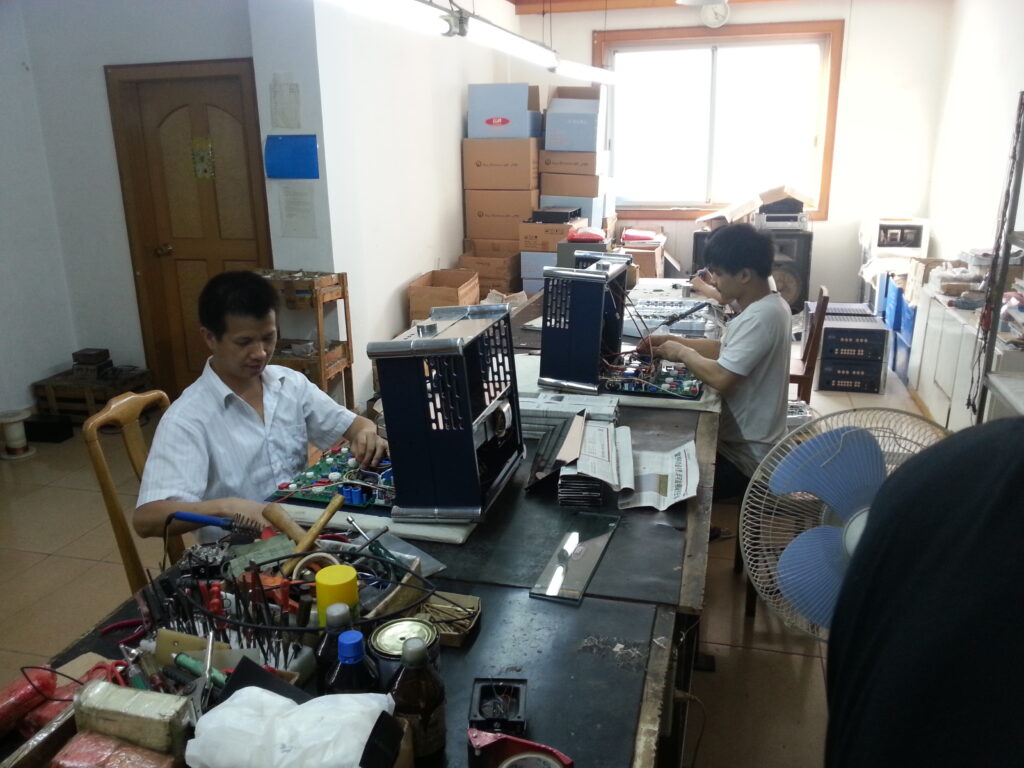 So the reason nobody heard about you before your Youtube awards, is because you were just a subcontractor doing assembling?

Indeed, reading this section, it may be the first time you’ve heard about our brand whereas our company now exists for 17 years.

That’s because Doge brand stayed in the shadow of LUA; until recently we did not want to ‘emerge’, in order to stay faithful to LUA and not disturb their sales. However, after reaching the most significant part of our production five years ago, their orders went down to almost zero.

This said, please don’t mistake everything. We were in OEM partnership, not subcontracting. We are amplifier designers, so our main added value is not assembling. We sell the technology we initially designed on our own products, to western customers like LUA without self know-how in amplifiers. Of course, our customers can require specific chassis or customizations. Customer, even in OEM relation, remains the king!

Of course, our customers can require specific chassis or customizations. Customer, even in OEM relation, remains the king!

Also, in OEM relation, in opposition with subcontracting where you mainly offer labor, the intellectual property of LUA electronic designs belong to us, while LUA remains the owner of their external appearance design.

Could we sum up you were lazy to do the sales, so you focused on assembling?

Hey, would you mind stopping to mention assembling and respect the term or designers! Nobody is lazy at Doge. But Mr. Liu skills were in design and robust construction. He is not a businessman, and humility is also to recognize you should focus on what you are good at. So it was a win-win relation, Mr. Liu focused on what are his talents, designing, and manufacturing while LUA did the sales job. That’s the reason, having now to promote Doge brand, he had the clever reflex to hire a European marketing manager. Nobody is good at everything.

So when this German client ordered from you he was “the king” and now that he stop to order from you, I feel you put on the table all these little secrets. Isn’t this a bit mean?

It is not that simple. If China export more and more every year, not all Chinese entrepreneur are foxy businessmen. Sometimes they follow faithfully their OEM customers and don’t realize they are in a dependent situation.

On the opposite side, the western OEM customers don’t realize that the Chinese entrepreneurs who manufacture their products have a manufacturing process organized mainly around their orders. They often don’t realize that if their business turns bad that they should inform, us, the OEM manufacturers, in advance to give us time to reorganize our business model.

The reason we are coming out of the waters with what you call “to put on the table little secrets” but what would rather call “transparency”, is because we faced a LUA orders collapse very sharp and very sudden, going from full workshop occupation to almost zero in just 3 years. So being obliged to reorganize our business so suddenly, we have to explain to our potential customers why we emerge just now.

So you just created your own brand after the fall of LUA orders?

Don’t take shortcuts! Our brand existed since 2003, but only 10% of our production was done under our own brand, the remaining was for LUA. So we had no time to promote it as we always put in priority LUA requests.

We always created our Doge products first, then LUA was able to evaluate them and customize them under their brand.

That’s the reason it is important to explain we are NOT a new brand, in particular, because “new” could also mean inexperienced, but even unknown we are very experienced.

So what is new is not our brand, but the fact that our company has to do a rebirth under Doge brand only, the biggest, but most exciting challenge since our incorporation and we are now looking for reviews of our products under our own brand, which is very exciting as first feedbacks from reviewers are extremely positive.

But the most exciting in this rebirth challenge is to allow our future customers to own products that are worth AND also were sold in Germany 3 to 4 times our prices; and at the same time to supply these products with improved quality audiophile components, in the counterpart of what we save on distribution costs compared to LUA business model; and what we save with less luxury chassis than LUA without expensive chrome finish, but instead, a still elegant anodized aluminum finish.

Finally, what you say is LUA products were not made in Germany but in Doge factory??

LUA’s products were mistakenly reported by German journalists as “made in Germany”. But this inaccurate reporting by experienced journalists is somewhere funny because it is the clear evidence that our products meet the very demanding German standards and finally made us feel more proud than offended.

HEY, guys wake-up! Don’t you think if they said “made in Germany”, it’s not the journalists’ mistake, but just their willingness to make more money because the “made in Germany” has great value.

That’s your statement, not ours. We do believe that as LUA was a “made in Germany” speakers company, so the German journalists took for granted that their amplifiers were also made in Germany.

Hey guys, wake-up! If not pretended on purpose “made in Germany”,  why didn’t they asked you to write “assembled in China” at the back of their products like Apple does.

If Mr. Helmut LUA would have done this on purpose he would have been dishonest with both his customers and dealers as only tubes were plugged in Germany. We refuse to believe this and we still think the German press misunderstood the manufacturing origin of LUA products. Maybe the only fault of Mr. Lua was not to inform the journalists that they were wrong in writing this.

Guys, you remain quite naive…

Maybe… It’s like that. We had a very good relationship with LUA and being very demanding, they helped us to do the best of ourselves and manufacture Doge products with German standards. If they have said to the journalist on purpose it was made in Germany, it is something between their conscious and their conscious. They were just customers, not distributors. Everything was DECIDED BY THEM. Period.

But finally aren’t you simply using LUA to endorse you?

In a sense yes, but what’s wrong doing so? Mr Lua has 86 and is now retired except doing a few calls to fellow long-time customers. We provided LUA with some efficient electronics designs, that we didn’t have the opportunity to make known under our brand because all workshop capacity and our energy was occupied for LUA. We’re just a victim of LUA unpredictable collapse whereas on our side we stayed faithful for 15 years, so that’s quite logical that in a first step, to come out of the water, we refer to our products designed under LUA brand as they were already reviewed in Germany. It is also interesting for the potential buyers to know that our products were reviewed at 3/4 times our price and got very good price ratings with this 3/4 times price.

But today if we are explaining transparently our situation, it is because we don’t want anymore to be known as a reliable manufacturer, but as DOGE, an innovative brand, as all the electronics of all our products that were shipped from our factory, were solely designed by us (though a few customization instructions from LUA), and all our innovations were released on Doge brand first. As an example, our advanced autobias was released under the Doge brand in 2011 and under the LUA brand in 2012 only.

Which evidence do you have it is not LUA who made the design and you who used it under your brand Doge?

Very simpled. Most of LUA products have been released a year or 6 months before the similar products under LUA brand.

In March 2011 we created our patented “PAB autobias” (Precision Auto-Bias). This is a computer-managed bias control, unlike any others on the market. It was released under LUA brand only in December 2011.

In 2014 we released an improved version called PADC (Precision Autobias with Dual Class mode). The new feature is capable of offering at the same time Class A and Class AB on the same amplifier by computing management of both voltages and anode currents depending on the selected class. To show our difference we decided for once, not to offer the PADC technology to LUA, that’s the reason this unique technology can be found only on Doge products. All our amplifiers now include PADC technology.

Same for Doge 7 DAC, we decided to keep only under Doge brand.

You mentioned you would say a word about your fake components…

To pass the severe DIN Standards in Germany, LUA required us proof of components origin. So we have to create a sourcing process by asking all the components’ manufacturers to provide us the list of their authorized wholesalers in China, and since that time we do this for all our components. Sometimes we even source directly to the manufacturer, like with the UK coupling capacitors Claritycaps.