In 2011 we designed an exclusive system called PAB Autobias ( for Precision Auto-Bias).  It is a patented (in China) innovation from Doge for a Bias friendly setting and more accurate than manual bias setting which is the reason its name includes the word “Precision”. This system is managed by a microprocessor.

Later in 2016 So we renamed this global system as Doge PADC (Precision Autobias with Dual Class mode) as we added new features like to offer at the same time class A and class AB on a same amp.

Tubes amplifiers have this difference with solid state amps that they need some setting for each tube. That’s what make the charm of tube world and that’s also the constraint which makes that some tube amp owners move back sometimes to solid-state world as this setting should be done at every change of tubes and then once a year.

The reason of this “bias setting” is not so difficult to understand. While transistors are manufactured by robots, tubes are handcraft made by humans and each one is a piece of art as the “grid” (the piece between
anode and cathode) wires are almost thin like hairs. As a result each tube manufactured has a slightly different resistance.

Normally the anode current in all tubes should be the same. But because each tube is different as explained just above, there is a “bias” that makes the anode current is not always the same in each tube. So a setting
is required whereas in solid state world not any setting is needed.

So what is called “Bias setting” is a setting to get the same current passing through all tubes of the amplifier. Doing this setting requires at least a voltmeter and a screwdriver, but also experience, and little DIY knowledge.
On the two photos below, we show you a Mingda amplifier internal view (a quite popular Chinese brand ), with the trimmers inside the chassis and on the second view a technician setting the bias with the amplifier turned-on, opened with its 800V! 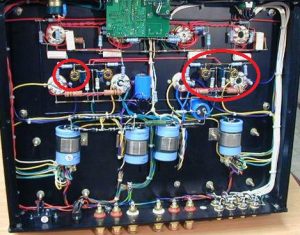 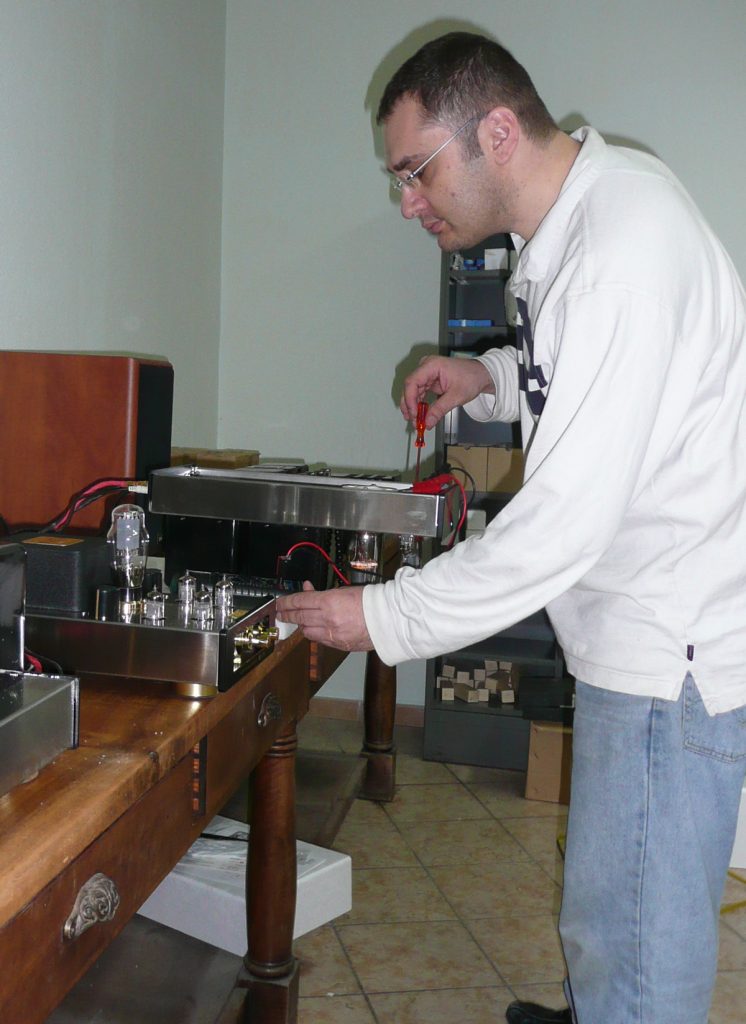 The advantage of our PAB autobias, is that you don’t need any tools to set the bias but your fingers! (As said Steve Jobs when he introduced the iPhone in his 2007 Keynote). It just uses two buttons on the front panel or the remote controller. Just below you can see a screenshot of DOGE 9 PAB front panel.

All the job to make this friendly user interface is done by a sophisticated STT-Thomson microprocessor. To make this simple it required us the huge job of research and a partnership with the Digital department of the South-West Central University of China. It is really a sophisticated technology that we are proud of and that we have patented in China.

Because our PAB autobias uses a sophisticated micro-processor, it also allows us to offer many additional features, like:

Why is it important to have an autobias ?

The “bias” has to be set each time you change of tube. This need can be simply because you want to try another brand of tubes, or if one tube crashes before its expected life span. But it is also important to know that
because the metal parts inside the tubes are extremely hot, the resistance value of each tube change year after year, and the settings that were goods at the date of purchase might not be accurate two years after.

HOW our Precision Auto Bias operates?

The reason is simple. The Bias reset is a process that takes around 45 seconds because our precision is of +/- 0.0001 Ampers and it takes a few dozen of seconds to reach that precision. On the other hand, the bias
checking function requires only 5 seconds. Because both Bias checking or Bias reset requires putting the amplifier in mute mode, the purpose of the bias checking button is to put your amplifier in mute mode the shortest time possible is not any as most of the time, you won’t need to pass through the step of the Bias reset. So, with the Bias checking function, you can check it as frequently as you wish, without the need to stop your music for too long. However, we recommend our customers not to focus on this too often. One check twice per year is enough. Our wish is that you listen to music first not focus on settings 🙂 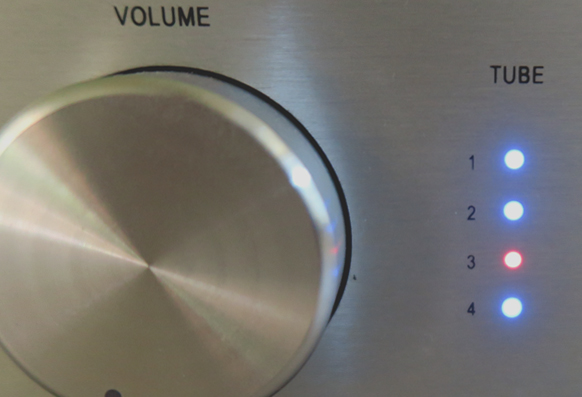 The process itself of our PAB is simple :

Each tube has a dedicated LED. If the Bias is set at the good value, the LED will light in blue color. If the Bias value has changed and is not accurate anymore, then the same LED will light this time in red color. If you realize that at least one tube has its LED lighting in red color, then you will have to push the Bias reset button and wait 45 seconds to have your bias be accurate again. When all LEDs are blue, the process is finished, and you can go on to play music again.

You might read is some reviews of the LUA products we designed in particular in the German magazine STEREO that the PAB autobias, called by our customer LUA, the “GS-Autobias” was invented by LUA. We want to clarify we have installed under license our autobias in their products at the end of 2011, but our PAB autobias was designed in January 2011, released in April 2011 on Doge 5 for the first time, whereas for the first time in November 2011 on a LUA product.

PLEASE NOTE THAT BIAS SETTING ARE ONLY FOR POWER TUBES, like KT88, EL34,… and not for input tubes like 12AX7 or 12AT7 inside our preamplifier or CD player. All these small tubes have already traditional autobias with cathode autobias.

Note for users who only want a deeper knowledge :

In the 60’s already appeared some auto-bias (using a resistor and capacitor below the cathode). This auto-bias was more friendly to use for the average user than manual bias, but had in one hand the requirement of using absolutely perfect matched tubes, and on the other hand this “old” autobias decreases of around 30% the potential max power of any tube used. As for example, an EL34 push-pull of 50W, will deliver only 30W with the auto-bias technique of the 60’s.

And at last, while aging, it doesn’t remain as accurate as manual bias, because the electrolytic capacitors used have a limited life span. This technique is still used today by a few brands because it is the most simple way to manufacture a
tube amp, but not the most efficient way.