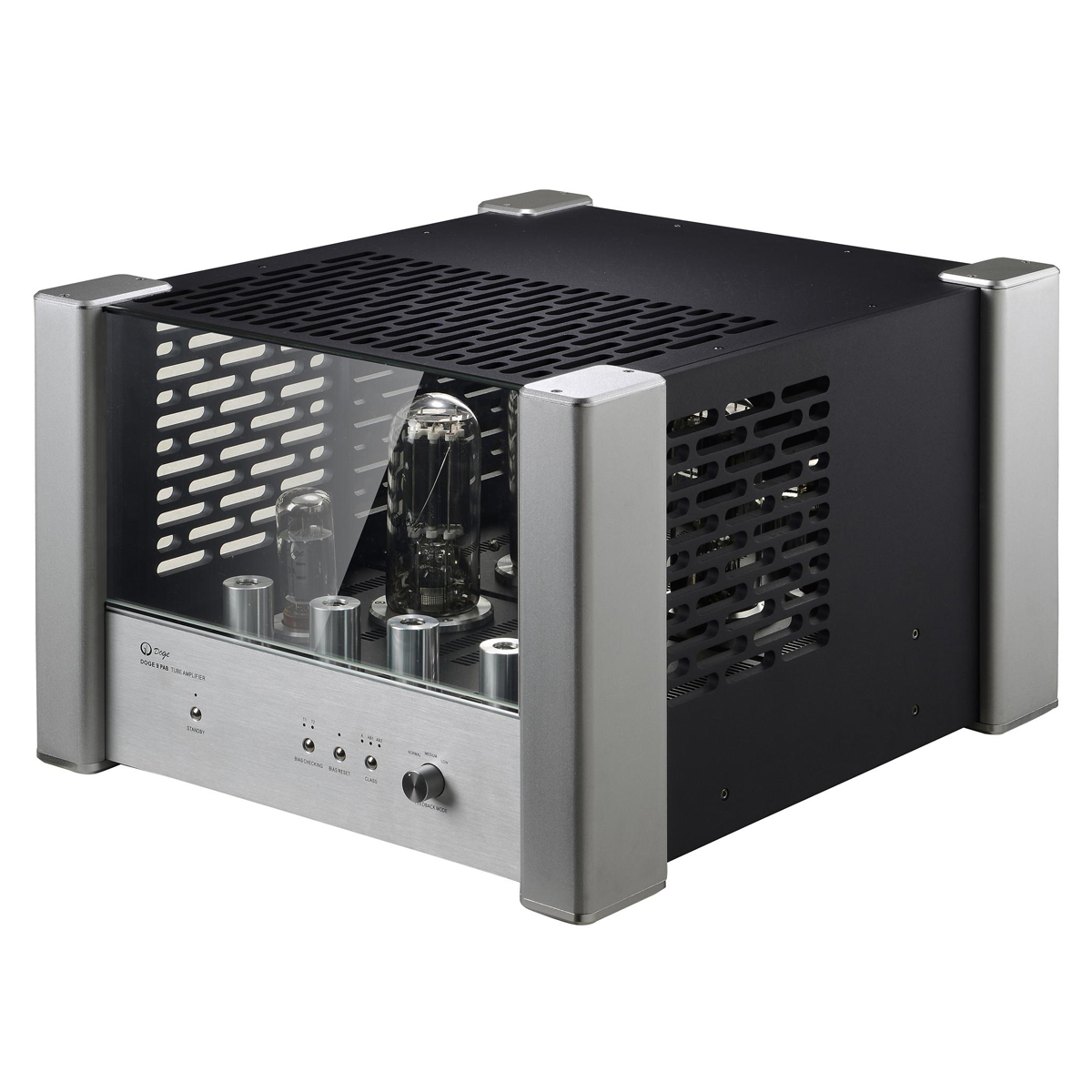 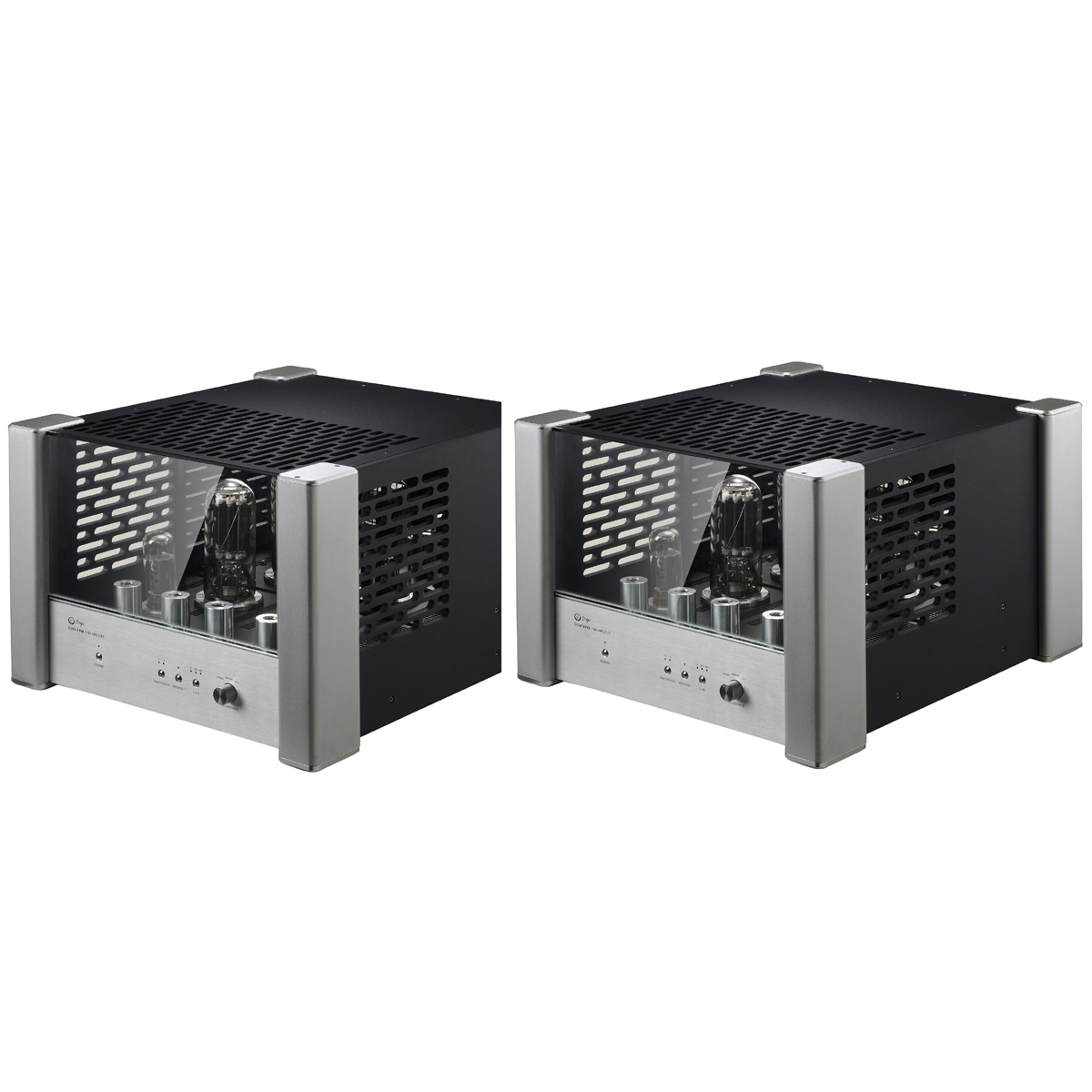 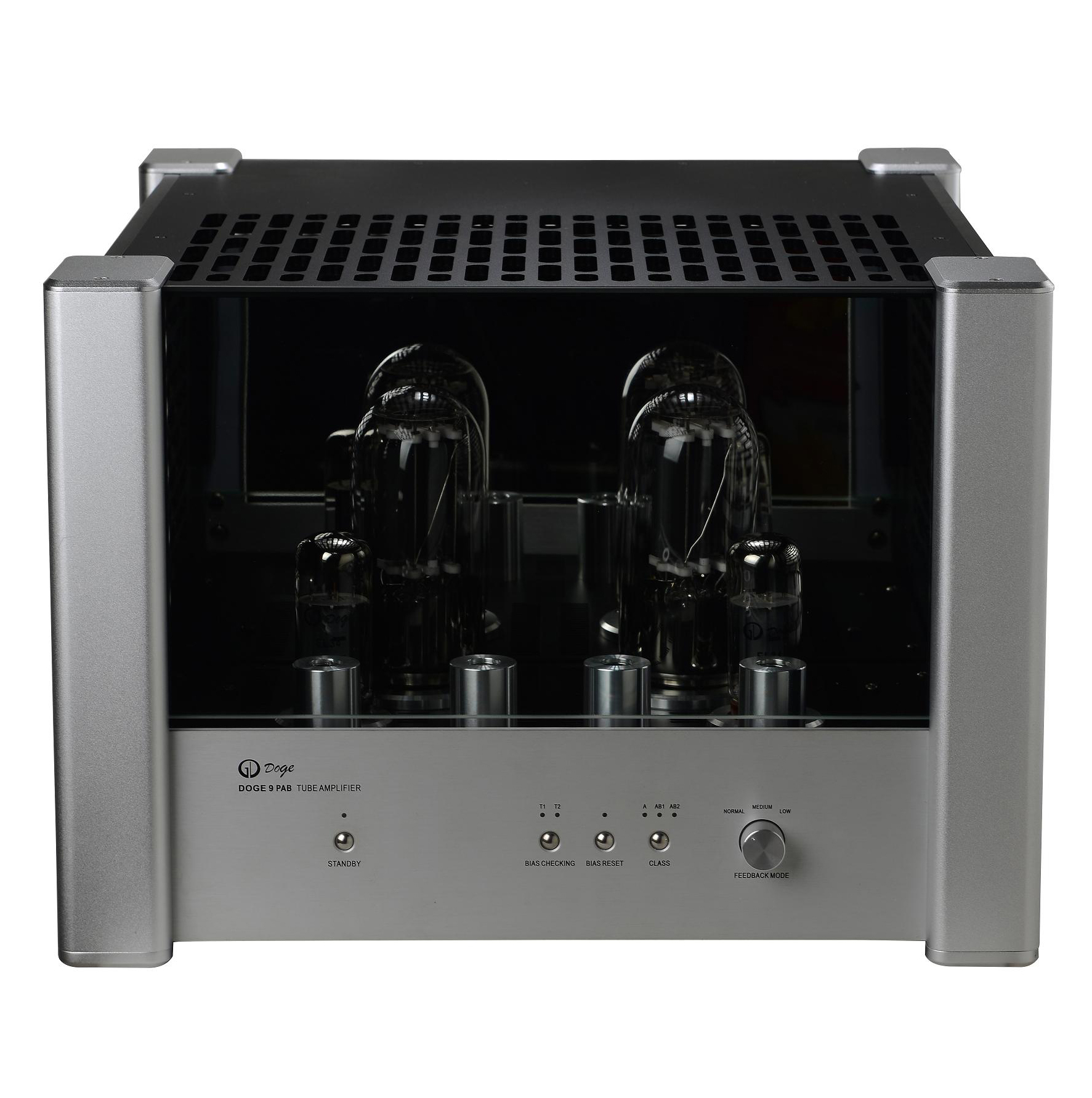 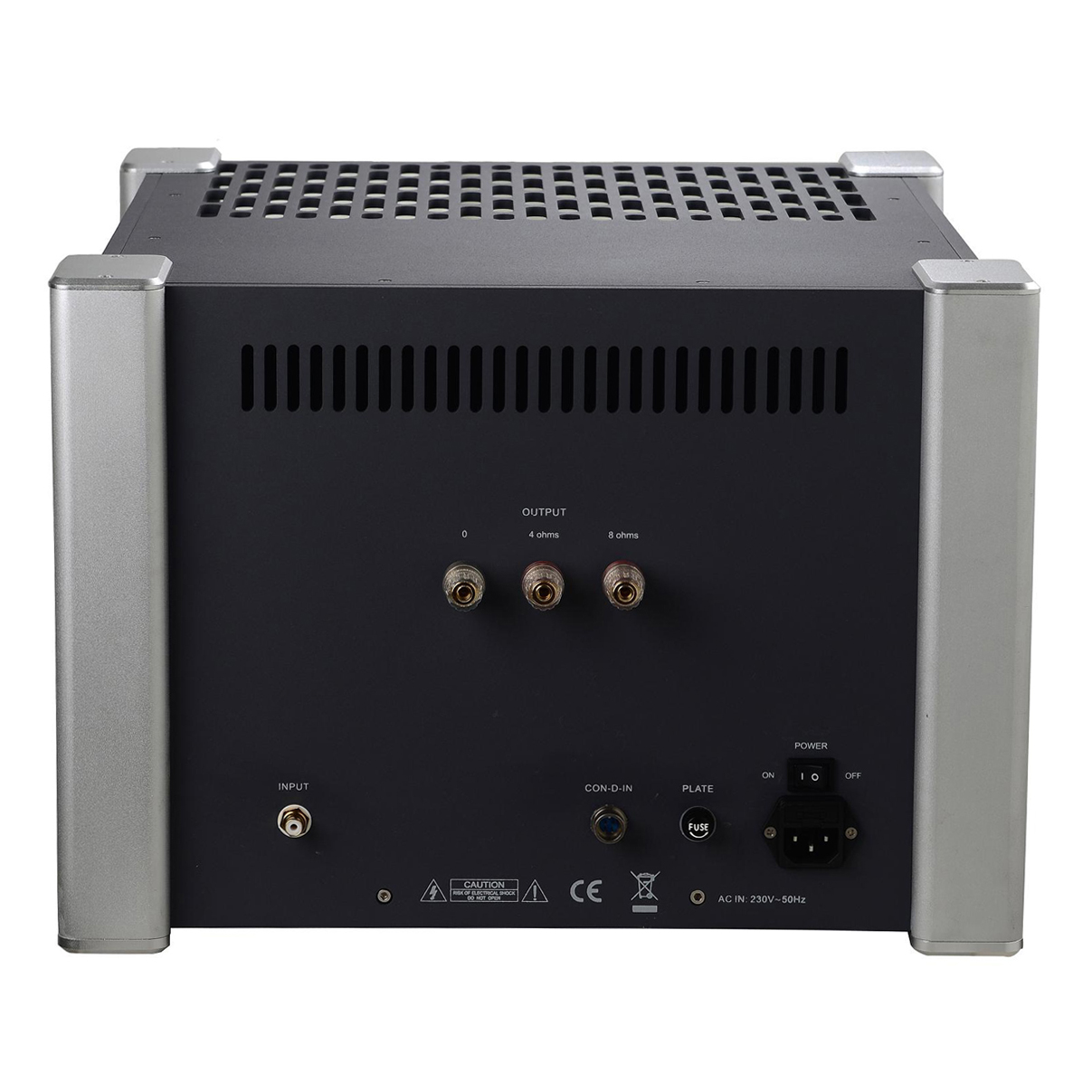 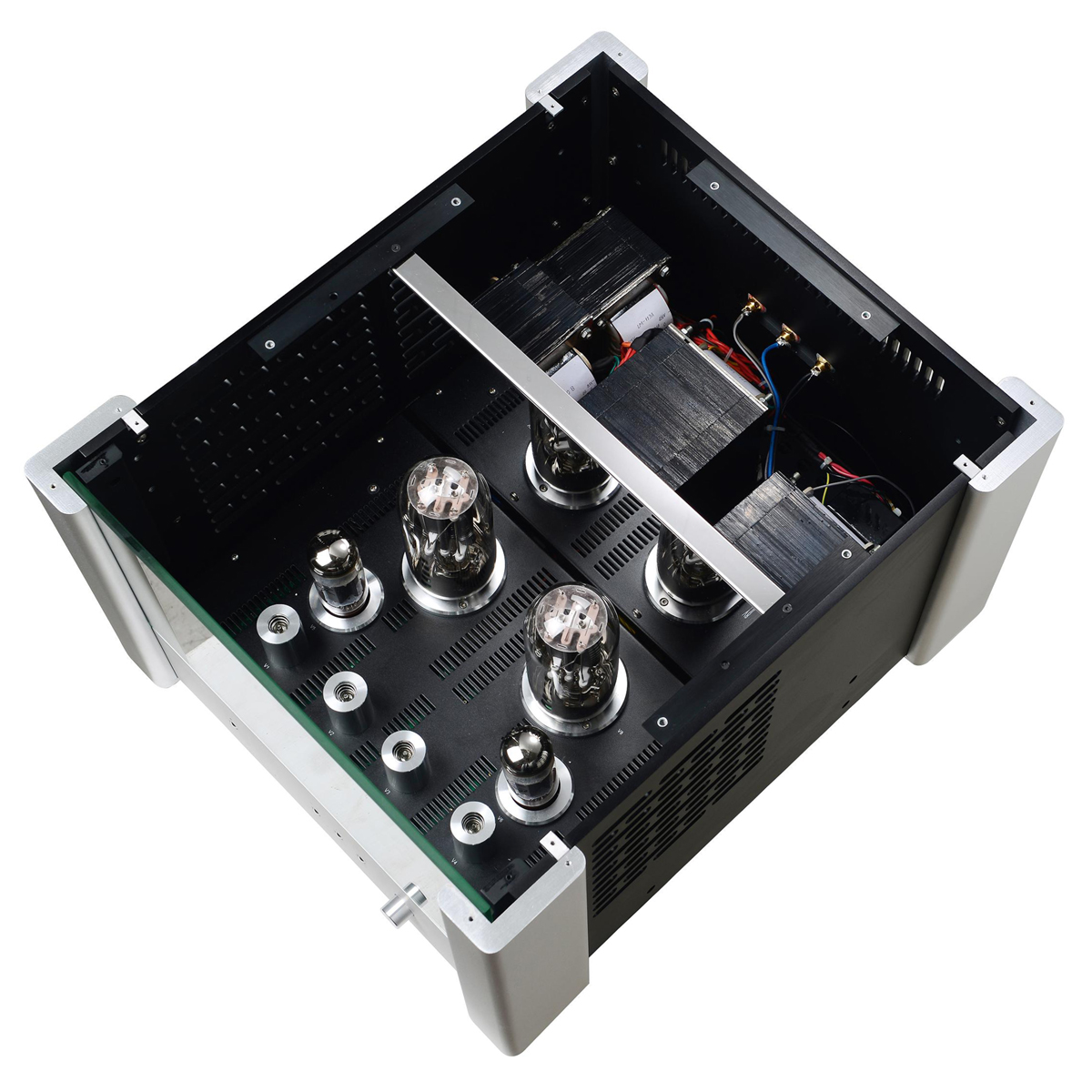 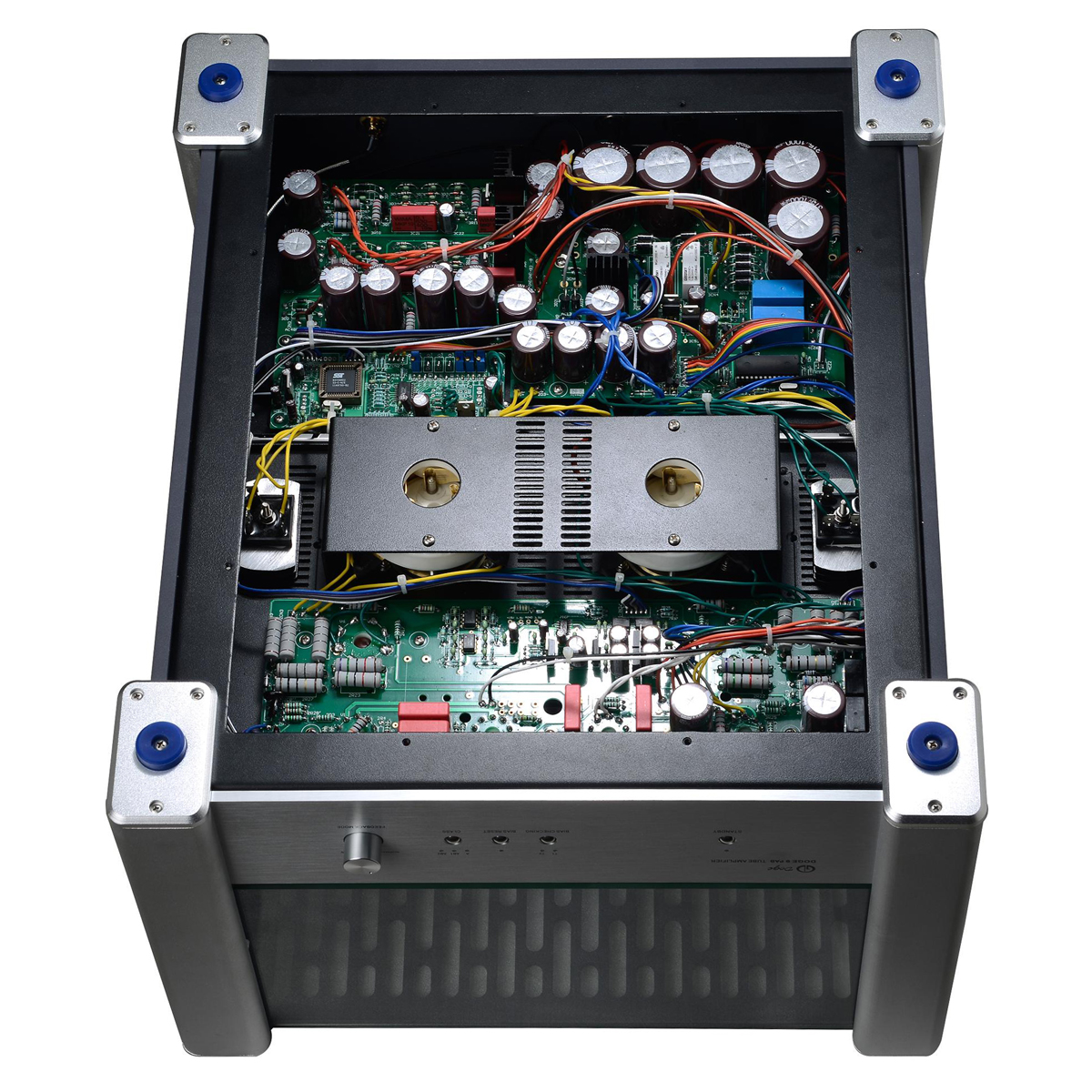 These power blocks are simply incredible. They will offer you the best sound money can buy for this range of power amps.

REGARDING ITS HIGH SIDE, ITS HIGH WEIGHT, ITS SHIPPING COST, IT DIDN’t MAKE THE IDEAL PRODUCT FOR DIRECT SALES. 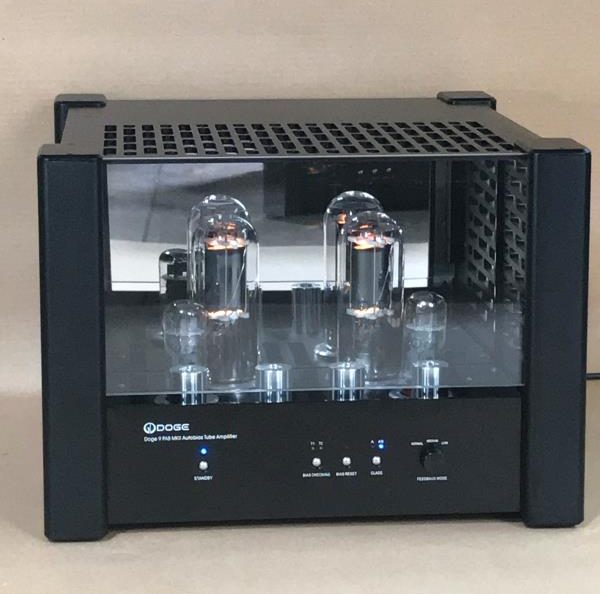 Doge 9 are our flagship amp with triodes 211 in push-pull configuration, “Dual Class A/AB” and “PAB autobias”.

These power blocks are simply incredible. They will offer you the better sound money can buy for this range of sound performance and external appearance.

You may think that $2,990 (excluding shipment) is quite an amount of money, but these blocks are a true bargain regarding sound performance, construction quality, and material involved (10 transformers in total, and 20KG of anodized aluminum as an example). Our opinion that you won’t find similar amps on the market below $10,000.

In the product images gallery you can see several photos, but please have a look at this photo in real conditions in our room at “Guangzhou High End 2019”, the major annual show in China, similar to Munich High End. 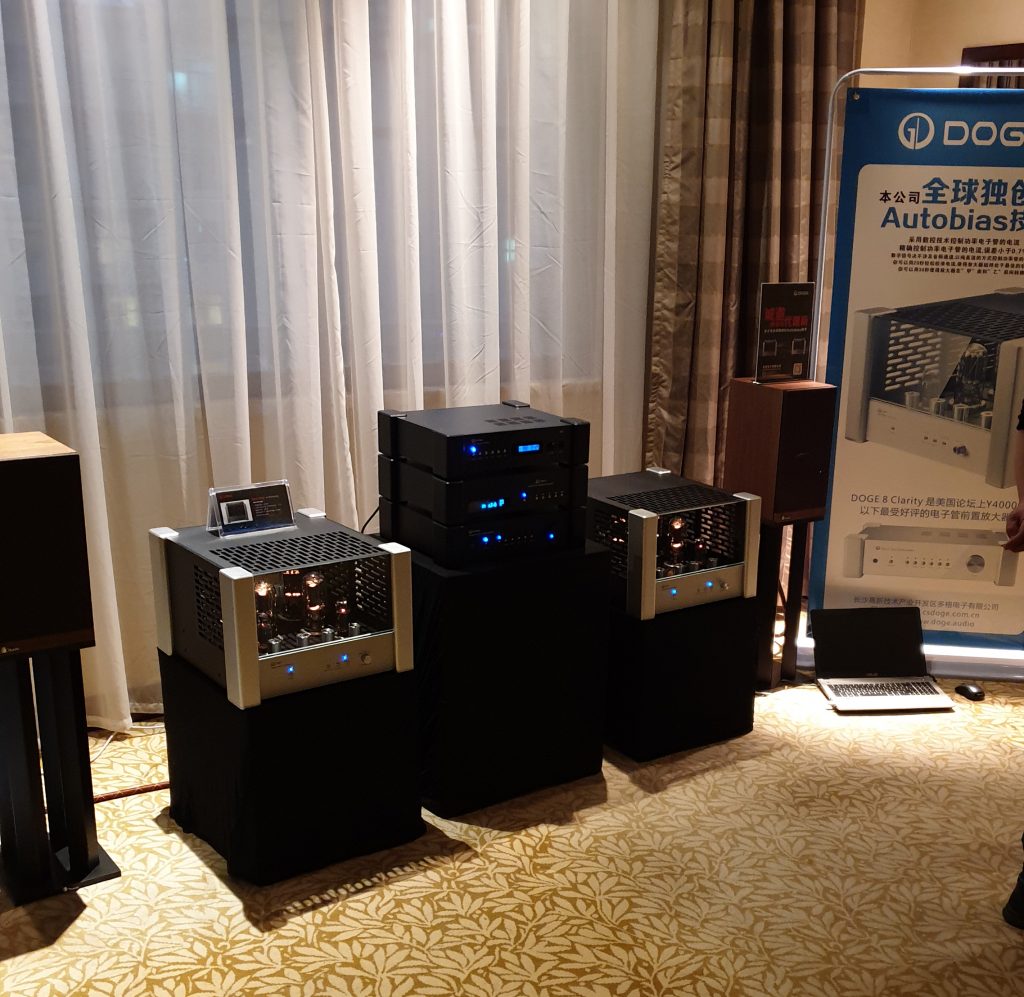 First of all, don’t think that these power blocks are targeted only for users who need high power. They have not been designed for power performance first, but with the core idea that they should deliver a marvelous sound performance.

So why make them so power efficient? We simply thought that if these speakers would deliver 130W with areasonable distortion, they would have an extremely low distortion at 30W. It is the case, as they rate 0.08% distortion at 30W which is simply incredible for triodes.

The advantage of their high power is that they can match with all speakers on the market, including the very low-efficiency ones, the ones requiring high current, the ones requiring high damping factor, and with all kinds of listening rooms, including very large ones. But even you have a normal size listening room (which is the case of most of Doge 9 owners), these power blocks will deliver the best sound performance among all our products.

What is the benefit of our DUAL CLASS mode :

What is fantastic is with the Doge 9 PAB it is that it has 2 amplifiers in one.

To sum-up, you can really enjoy 130W RMS with a great gorgeous sound and in the same time depending on your tastes, just after 45 seconds to recalibration, to have benefit of a true class A amp with 70W, giving you more precision, more transparency. The change of mode just requires 30 to 45 seconds to let the PADC microprocessor calibrate new voltages and reset the bias settings to higher current.

How so much power for triodes

Some competitors have similar amps rated at 50W to 80W. Why ours can go so much higher in terms of rated power?

To reach this power, we use 5 transformers per block. Because five transformers might have cause some vibrations, we have deeply reinforced the chassis by making it with thick 8mm aluminum, which is a thickness you usually find only on front panels. In addition, the part where stand the transformers is an of mix of aluminum + steel. On the scale the result is simple, the weight per block is : 106 pounds or 48Kg.

What about the sound performance?

Triodes are unique in tubes audio. They have a warm and marvelous sound but their weakness is often their low power. With the 211 in push-pull configuration, the power is not anymore an issue.

These power amps use 2 triodes 211 (also known as “VT4C”) in push-pull configuration. Some potential buyers might be a bit skeptical about 211 because they are less known in Hifi than the famous 845. Actually, the 211 and the 845 are sister triodes with the same external appearance of the anode, however, the specification of 211 has been improved for military use. They are famous for being used in many great Audio Note Japan and Kondo amps, like Ongaku and Ga Kuon to name just two. These are great tubes – powerful, musical, robust and easy to get. To make it simple, although less known, the 211 is an improved version of the 845.

The sound stage of these power amps is incredible. Especially on live recordings, you can really feel how far the singer is from you. In addition, you have a triode typical sound, which means a warm and fluent sound without any aggression in mids or highs.

A word about stock tubes

By default, DOGE 9 is supplied with Psvane 211 “Hifi Series” which is a very good standard.

The other tubes are Shuguang tubes with Doge additional QC. 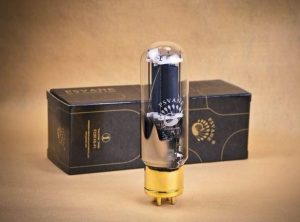 If you budget allows it, you can spoil yourself with upgraded tubes. Last year in Guanzhou exhibition, the Linlai new brand of tubes has kindly lent us a quad of their flaghsip E-211. www.linlaitube.com It is the only 211 on the market to use metal plate. The sound performance was immediately audible. This upgrade for a quad (excluding the cost of stock tubes) is $899.

There is another tube which is it higher standard, the Psvane WE211 and LinLai WE211

Both are very good tubes, but the Linlai is more fairly priced at +$799

These power amps are designed to be very safe amplifiers. If it happens that one tube would crash by accident, this amplifier has a very efficient Auto Protection Mode (APM). As a result, the amps would automatically turn into standby mode.

– It has a Soft-Start function to increase tubes’ life span.

– It has a standby function, so you can turn them on from your sofa with the remote controller of our Doge 8 preamp (a cable connection between Doge 8 preamp and Doge 9 is required).
– There is a fuse for the main power supply (built-in in main power female plug) and a second fuse especially for the main power transformer supplying high voltage. This, added to the auto-protection mode, make these blocks indestructible.

In 2013 we added to the Doge 9, a new function called the Doge FLS , for Feedback Loop Selector which allows the user to choose between two feedback loop modes. The low feedback mode will offer better sound but requires very linear speakers at the output. The normal feedback mode is the same as it was before 2013 and is recommended with speakers who have less linear frequency response.

> Factory-direct price: once you will have checked-out (without need to register) you will fill your country and see our total price with includes delivery to your front door, Paypal or CC fees, and one year warranty served in your country. If you pay by bank transfer you will get 5% discount as our bank doesn’t charge us any fees (use coupon code “bank” at checkout). Possible taxes in your country are at your charge.

> for a SET including one pair of DOGE 9 PAB + one DOGE 8 CLARITY unit + you will get for free the interconnection cable below.

A said above, when you have a set DOGE 8 + DOGE 9, there is an interesting feature which is that the DOGE 8 can automatically start the DOGE 9 blocks from DOGE 8 stand-by button or from DOGE 8 remote controller.

This Interconnection cable is automatically supplied if you buy a set D8/D9.

In case you already own a DOGE 8 and you buy the DOGE 9 PAB we charge the interconnection cable $90.The length is 2.5 m for each block. In case you need additional length we charge $30 of customization fee and $25 per extra 0.5m.

If you have an old version of Doge8, to user interconnection cable, you will need to change a chip called EPROM, which is just plugged inside a socket. We will supply this EPROM for free if you ask it at the time your order your pair of DOGE 9 PAB.

If you wish upgraded, please place first your order for Doge 9 then mail us and we’ll create a manual order for upgrades.

Optional tube upgrades. Prices are of the pair of blocks. They do not include stock tubes. It is the

difference of price between stock tubes and upgrade tubes.

Be the first to review “DOGE 9 PAB” Cancel reply